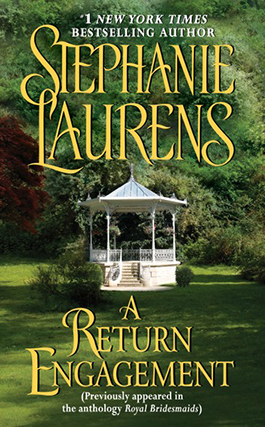 And also as a paperback from Avon Books

Released as a stand-alone e-book in August 2013.

Originally published in a compliation of three short stories by 3 different authors, titled ROYAL BRIDESMAIDS,  inspired by Pippa Middleton, the bridesmaid in our most recent royal wedding.

Stephanie's short story in that collection was RETURN ENGAGEMENT:

Lady Nell Daughtry has her hands full getting her sister safely married to the Prince of Lautenberg. And things aren't made easier when she discovers she's paired with Robert Knightley…her would-be husband who walked away.

"Each tale conveys the responsibilities of the bridesmaids who are trying to ensure that their particular bride makes it to the altar and that the wedding goes off without a hitch even while deling with their own romantic dilemmas. The fresh twist on those duties and the extremes to which these dedicated women are prepared to go make these fun quick reads." Night Owl Reviews, Reviewer Top Pick.