The Seduction of Sebastian Trantor 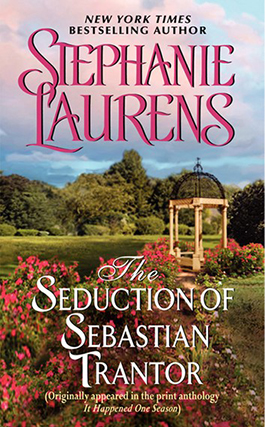 THE SEDUCTION OF SEBASTIAN TRANTOR novella re-issued as a stand-alone e-book February, 2011.
Available globally in all e-book formats

IT HAPPENED ONE SEASON sees the return of the four Regency historical authors who brought you the highly acclaimed, award-winning IT HAPPENED ONE NIGHT. But this time, the plot used as a base for all four novellas was suggested by a reader, and voted as the plot most readers preferred to see by you, the readers. The elements of that winning plot, supplied by Phyllis Post, were:

1) The younger brother of a titled lord, the hero had a career in the army, but has lived as a recluse since returning from the war with France.

2) The heroine is shy or unattractive and after many seaons has never had a suitor.

3) The hero's brother had only daughters and asks his brother to marry in order to try to ensure the succession stays within their family.

To see how different the stories our four authors wove from that beginning are, pick up your copy of IT HAPPENED ONE SEASON.

A handsome hero returns from war, battle-scarred and world-weary. But family duty calls and he must find a bride.

A young lady facing yet another season without a suitor never expects to find herself the object of his affections.

It Happened One Season...

In Stephanie's novella, THE SEDUCTION OF SEBASTIAN TRANTOR, on returning from the wars, Sebastian is informed by his older brother, who has fathered five daughters, that it is up to Sebastian to secure the succession of the estate. Conscientious and duty-aware, Sebastian accepts the burden, but quickly discovers finding a wife amid the giggling hordes one battle he has no stomach for. But then he stumbles on Miss Tabitha Makepeace riffling the library desk of his titled host. Tabiths, who has no great opinion of men and regards them as largely irrelevant, is engaged on a quest to espose a society blackmailer. Somewhat to her surprise, she discovers in Sebastian Trantor a gentleman as unconventional as she is, and who very quickly proves himself to be - in multiple ways - very mch after her heart.

Four amazing talents have come together to create one of the most unforgettable events of the year. The results are spectacular - each story is as unique as a lover's first kiss.

"Each author utilizes her inimitable talents to concoct a beautiful love story in another wonderful collection! Kudos to all four authors!" Night Owl Reviews

"These four charming novellas are as different as the authors' names. You'll find wit and passion, feel sympathy and concern, and with four such stars you'll be sure of superior writing and color - don't miss this fascinating book." Romance Reviews Today

"All in all, a delightful romantic read...for you to savor." The Romance Reviews