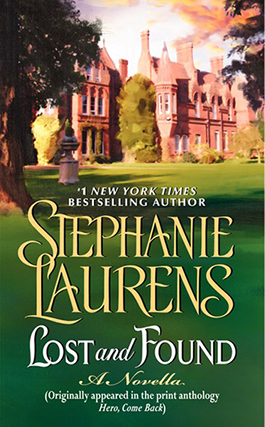 LOST AND FOUND novella re-issued as a stand-alone e-book in September, 2011.

Available globally in all e-book formats

For this anthology the theme was secondary male characters from earlier books finding their own ladies. The hero in Stephanie's novella is Reggie Carmarthen (from ON A WILD NIGHT etc) and the heroine is Anne Ashford, sister of Luc (ON A WICKED DAWN), Portia (THE PERFECT LOVER) and Penelope (WHERE THE HEART LEADS).

Reggie Carmarthen is looking for a wife, but is unimpressed by the giggling hordes. Then his protective instincts prompt him to step in and rescue Anne Ashford, the sister of several good friends...only to dicsover Anne is on a distinctly scandalous crusade to uncover the noble lineage of an orphaned waif. Unable to resist the tug, Reggie styles himself Anne's champion, and together they pursue justice - and, along the way, discover themselves, and gain their just reward.